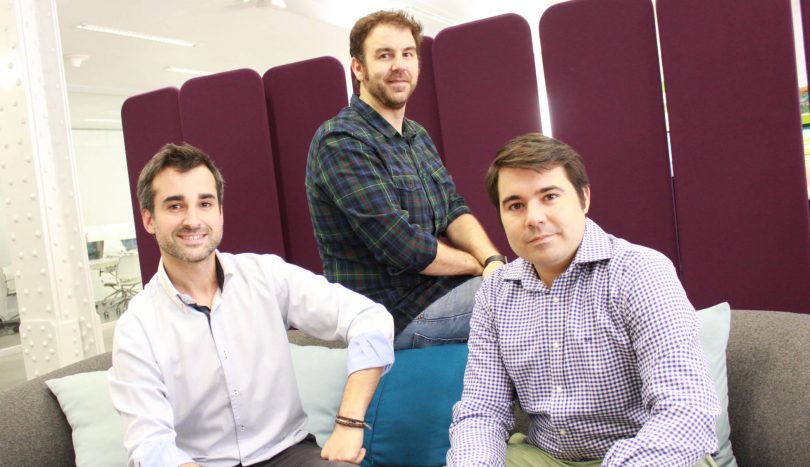 Written by Valentina Cullmann
Travel startup Triporate sets a new record by exceeding targets and raising €266,000 on the platform Startupxplore within only one hour, Startupxplore shared on Twitter.

The funds come from a total of 36 investors that helped to exceed the its initial target of €225,000, and generated waiting lists of investors, business news report.

The Madrid-based Startup focusses on corporate travel services by using artificial intelligence. With the slogan ‘Haz facíl tu viajes de empresa’, make your business trips easy, the company is marketing its services as a way for travelers and company to save time and money, from booking the trip to reclaiming and accounting for expenses.

Founded only last year, the funding round is a major success for Asier Vitorica, Ernesto Cohnen and Francisco Vieira, founders the young company. 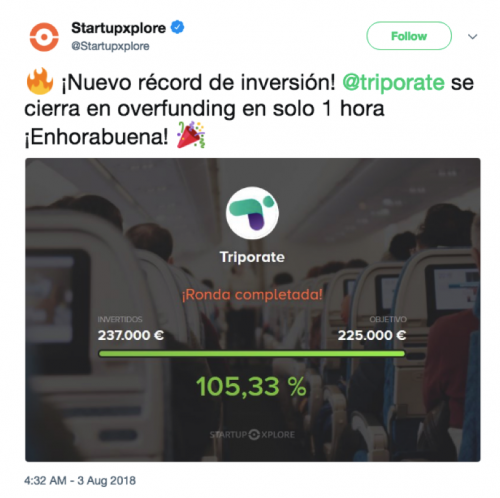 The new funds will be primarily allocated to product development, including process improvement and further developing the startup’s technology of artificial intelligence, according to the report. Further goals include strengthening its commercial position alongside its manpower behind the operations team.

The investor excitement might be fueled by contracts with a value close to one million euros in travel volume that the startup has already signed since its creation.

Furthermore, the team of Triporate’s founders have the support to tech giant Google behind them, as the startup is part of the Google Campus Program in Madrid.

According to recent reports, startups that are members of the Campus Madrid program received around €76 million only in the year 2017, constituting about a third of the €226 million financing raised by the various companies in the seven centers worldwide in the same period. In addition to Madrid, Google runs the program in Berlin, London, Sao Paulo, Tel Aviv and Warsaw.

Triporate has been part of the new cohort of Google campus residents arriving in May 2018 for a six-months program. The entrepreneurial peers that were equally selected are Reply.ai, a chatbot for customer service; Sheltair, providing hourly rental of office space; Barkyn, in e-commerce for dog products; Sepiia, selling anti-wrinkle and anti-stain shirts; Declaring, a virtual tax advisor; Clarive, a software tool for developers operations; and Unono, focussing human resources for junior profiles.

Triporate is currently using the campus residency to working on three tech areas: Amp4email (which allows interaction within the email itself, an area of key interest to Google), TensorFlow (the open source library developed by Google also used for machine learning) and natural language processing, NLP.

Spanish startups that base their technology on artificial intelligence have recently attracted significant interest by investors. In July, Madrid-based advertising management startup Adtuo closed a Seed Round of €100,000 to amplify its AI-powered platform.

Just two weeks ago, equally hailing from the capital, the fintech startup Finanbest that offers a wealth management solution for retail investors, raised €409,700 on Crowdcube,  more than doubling its goal of €196,000. The automated investment platform uses artificial intelligence so that anyone can invest from €3,000.