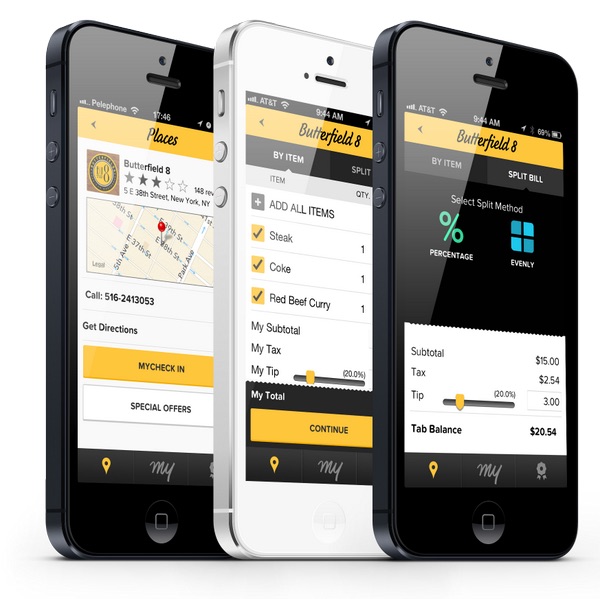 Spanish giant Banco Santander launched its most recent venture capital arm in July of last year, in an effort to make investments in up and coming technology companies in the fintech space. Bankers admit that innovation in many areas will come from the bottom, and there are two main ways to participate in those disruptions: via investments and/or acquisitions.

Santander’s InnoVentures Fund, led by Argentinian and former McKinsey consultant Mariano Belinky, has just closed the first investment (or second or third, depending on where you set the fund’s starting point) out of its $100 million fund: $5 million in MyCheck.

Israel-based MyCheck offers a mobile payments solution to restaurants in the UK, US and Israel. The company’s first product was a B2C app that allows consumers to check-in at restaurants, and split and pay bills straight from their smartphones.

MyCheck pivoted last year to focus on the B2B side of things, which is where many consider the money to be in the hospitality and payments space. Partner restaurants can adopt MyCheck’s technology and integrate it as a white label service with their very own systems, providing analytics and business intelligence to merchants.

The combination of both angles (B2C and B2B) also allow restaurants to offer specific deals and discounts to consumers, becoming a central way of managing their relationships with them.

In an interview with TechCrunch, MyCheck CEO Shlomit Kugler explains that “merchants today are struggling to succeed and are looking for higher tickets, more traffic, cut expenses, and to effectively market themselves”. Addind that “Uber-like experiences” are what consumers are interested in, with the ability of receiving offers and complete payments from their smartphones “whilst leaving their wallet at home”. The company says this increases user retention and loyalty.

MyCheck’s business model consists on taking a flat fee from merchants, including processing fees. In theory, the startup will benefit from Santander’s “reach and scale” and have access to the bank’s 107 million customers worldwide.

Besides integration with multiple restaurants, MyCheck has also signed agreements with payment providers like PayPal. In the US consumers can check into restaurants from PayPal’s app and pay their bills digitally using MyCheck’s technology, which is integrated right into the app.

Competitors to MyCheck include startups like TabbedOut or Dash, as well as Madrid-based Hey Please, which took care of mobile payments at restaurants during Mobile World Congress 2015.

It’s worth noting that apps like Hey Please and many others have taken a different approach, basically allowing consumers to order and pay meals from their apps while they provide analytics to businesses. As aforementioned, this was also MyCheck’s focus at the beginning, to then pivot to a more B2B model.

Banco Santander has been quite active in recent times, with several investments in fintech startups. The bank invested $5 million in mPOS company iZettle -a clone of Square based from the Nordics- in July of 2013 and in UK-based mobile payments technology provider Monitise in November of last year.

Santander bought 5% of Monitise for £33 million, along with Telefonica and IBM. As we covered at the time, Monitise’s bad financial health was known to many in the industry, and it only two a couple of months for the British company to put itself up for sale, following significant losses.

Both Santander and Telefonica were -and probably still are- clients of Monitise, who provided much of the technology behind Yaap Money and Yaap Shopping, two initiatives launched by both companies and LaCaixa with $18 million in funding and, it seems, with very little success to date.

Also in the startup front, Santander signed an agreement with P2P lending startup Funding Circle to provide loans to consumers and businesses.

Santander InnoVentures’ site only considers iZettle and MyCheck as portfolio companies. It’s not clear if Monitise’s investment came straight from the fund or from the bank itself.

Santander says that the fund will focus on four main areas (digital delivery of financial services, online lending, e-financial investments and big data analytics) and that more investments will be announced soon.