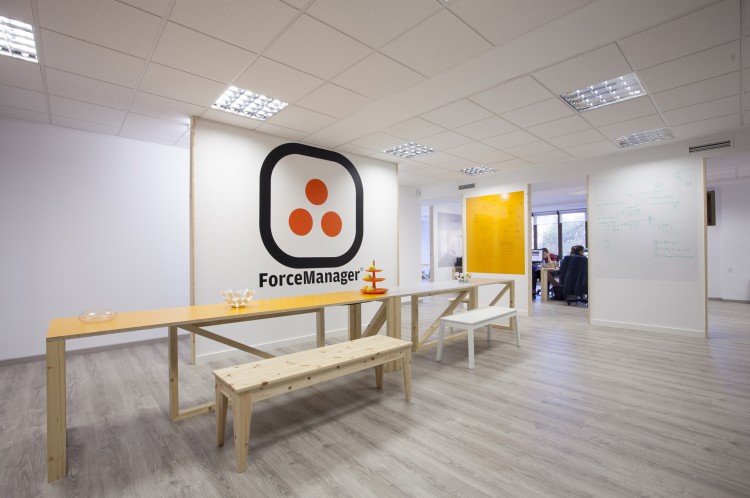 “It’s very easy to take a product and make it more complicated to use by adding tons of features. What’s really hard is to make a complicated product simple, getting rid of features that might add some -but not enough- value”.

The journey of this Barcelona-headquartered and SaaS company started in 2011, in one of Maciá’s clases at IESE. “I told the class and one of my professors about an idea I had about building a system to better connect sales people on the street and their directors”, he says.

Maciá had experienced in the field after serving various commercial roles in previous jobs. He saw that most of the time sales directors had no information of what was going on in the streets, and sales people had no easy way of reporting back what they were doing or the deals they had closed.

“The decision to build a mobile CRM was in part to fill a personal need and to align the interests of the different entities that form sales departments at small and large companies”, he recalls.

Him and Xavi Bisbal, who currently serves as COO of the startup and who had worked in the implementation of CRMs at IBM, would start working full time on the idea in 2011, after raising a small €400,000 round of funding from various investors associated to IESE, including the professor of the class he attended when he shouted his idea.

“Back then, in 2011, the market wasn’t as mature as it is today”, he says. SalesForce was ruling the CRM world by focusing on providing great desktop experiences, and small startups such as Base CRM were starting to make some noise in the mobile CRM space. In Spain, as usual, there was nothing.

In late 2012 ForceManager raised €550,000 from Enignova and in June of last year Nauta Capital came knocking on its doors, leading a €2.8 million Series A that has allowed the 43-person company to expand its sales and dev teams, open offices in London and to start thinking about expanding internationally.

Maciá says that business is going “very well” and that Latin America represents a “huge” opportunity for the young Barcelona-based startup. More than half of ForceManager’s clients and 30% of the company’s income come from outside Spain; Maciá declined to disclose revenue numbers.

As for the future, Maciá admits that although they see themselves in a good position to compete with bigger and better funded companies, “the mobile space changes so fast that one day you might be at the top and the next one at the very bottom”, he says.

During Mobile World Congress (MWC) the company announced their first app for Android Wear smartwatches, in an effort to make reporting back to sales managers simpler and effortless. The company admits that it all started as a side project in preparation for MWC, but that their own sales team and clients are finding it quite useful.

Maybe these and similar projects will keep ForceManager from falling into much feared complacency. “In this space if you’re too happy and comfortable with yourself, you’re pretty much dead”, Maciá says.