Ticketbis has closed a €5.2 million round led by Active Venture Partners. The ticketing company, based in Bilbao, had revenues of €29 million in the first half of 2014, matching figures for the whole 2013 year.

Ticketing platform Ticketbis has raised €5.2 million from Active Venture Partners, the Barcelona-based Venture Capital firm that’s quickly becoming one of the most active firms in Spain. Previous investors also participated in the deal.

With this round the total raised by Ticketbis to date surpasses the €10 million mark, after having raised €3.5 million a little over a year ago.

The company operates as an exchange, meaning that it focuses on selling second-hand or after-market tickets at a premium, competing with other platforms such as Viagogo, Seatwave or Stubhub. Since its founding in 2009 the company has doubled its revenues every year, and according to the latest sales figures published by TechCrunch the growth continues.

In the first six months of 2014 Ticketbis saw gross revenues of €29 million, matching figures for the whole 2013 year. Ticketbis charges an average commission of 25%, which implies that net revenues for the first half of 2014 were about €7 million and could reach €14 million by the end of the year. Here’s a non-official breakdown of the company’s performance over the past 5 years, based on a 25% average commission and gross sales shared by the company. 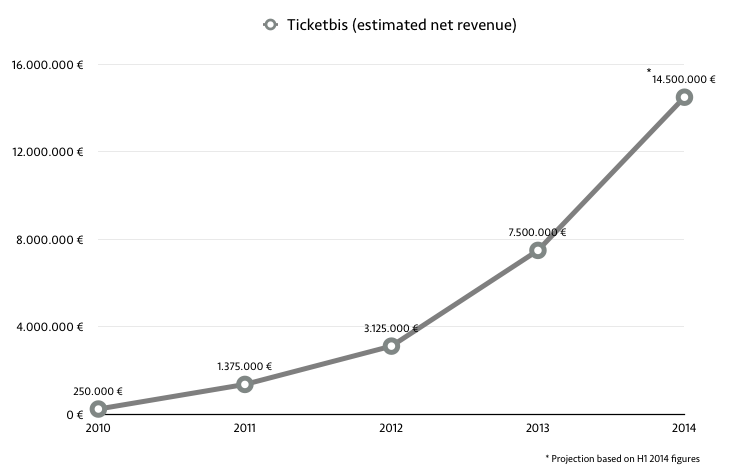 Ticketbis’ founders had previously claimed that the main objective for 2014 was growing internationally. At this moment half of all revenues come from Europe, 40% from Latin America and 10% from Asia, the latest market the company has entered.

Ticketbis is not the only Spanish ticketing startup to be in the news in recent months. Ticketea, based in Madrid, raised €3 million from Seaya Ventures in late 2013 and Entradas.com was acquired by CTS Eventim in March.