The CNMV has decided to suspend trading of eDreams stock after Iberia and British Airways have announced that they will no longer work with the Spanish OTA. Why? Lack of transparency.

eDreams Odigeo’s IPO was celebrated in Spain. The online travel agency from Barcelona was the first technology company to reach the Spanish stock exchange in a long time, and many saw its IPO as a sign that local companies could be once again relevant and that Spain was capable of producing unicorns.

This was at moment of the IPO, because since then the value of eDreams’ stock has plummeted. From €10.25 the day of its IPO to €1 right now. 90% of the company’s value has evaporated in just six months.

Iberia and British Airways have just announced today what could become another nail in eDreams’ coffin. Both airlines have decided to stop selling their tickets through the online travel agency. Why? Because they consider that there’s a significant lack of transparency when it comes to selling plane tickets on eDreams. As a result of this the CNMV (the equivalent of the SEC in Spain) has decided to suspend trading of eDreams stock, effective immediately.

Anyone who has ever used eDreams can recognize Iberia and BA’s complaints. Back in September I was looking for tickets and decided to give eDreams a try. 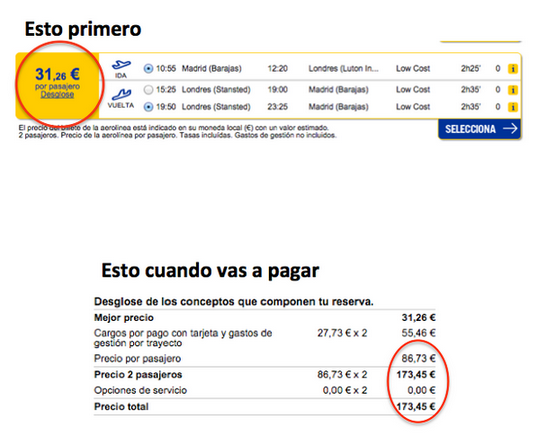 As visible on the screenshot above, the first search result showed a total price of €31 per passenger. I happily continued to finish the transaction but… right before I entered my credit card details, I took a look at the “This is how much you’re going to pay” section and saw that the price had changed significantly: from €31 to €86 (€173 for two tickets).

As Hemerotek has covered extensively over the past few months, eDreams is in deep trouble. Although the company’s gross revenues grew by 15% YoY in 2013, it lost €100 million between 2012 and 2014 and at the time of its IPO it had €650 million in debt.

In the second quarter of 2014 eDreams saw losses of €2.5 million (vs. profits of €3.8 million in the same quarter a year go). Losses that the company blamed on “Google’s algorithm changes” that affected the company’s (and the whole industry) SEM strategies. The truth is that eDreams is in a very competitive market where margins are lower than ever due to a significant increase in market players and, thus, competition.

The company has not yet reacted to today’s news. We’ll keep an eye on the situation and update this post if necessary. In the meantime, it looks like the so-called Spanish unicorn has lost its horn.

Tnooz has an official statement from Iberia and British Airways regarding its decision to stop working with eDreams. We have yet to hear from oDigeo.

“After negotiations failed to make such websites comply with its contractual obligations of information and with the Spanish and European legislation that protects consumers. We have negotiated tirelessly with Odigeo since many weeks ago to try to reach an agreement that protects our customers and respect the obligation to report the price with transparency,” said Victor Moneo, sales director of Iberia and British Airways in Spain.

Luke Goggin, director of sales for British Airways in Europe and North Africa, said also in a statement: “British Airways and Iberia have negotiated with Odigeo relating to non-compliance with the IATA resolutions and laws with unsatisfactory results. Accordingly, we have decided to close access to the inventory and the possibility of issuing tickets to web pages that remain unfulfilled.”

Iberia and British Airways’ tickets are once again available at eDreams.es and Opodo (France), as they have reached agreements with parent company eDreams Odigeo. Tickets from both airlines are not yet available at eDreams.com. eDreams shares resumed trading on Monday.