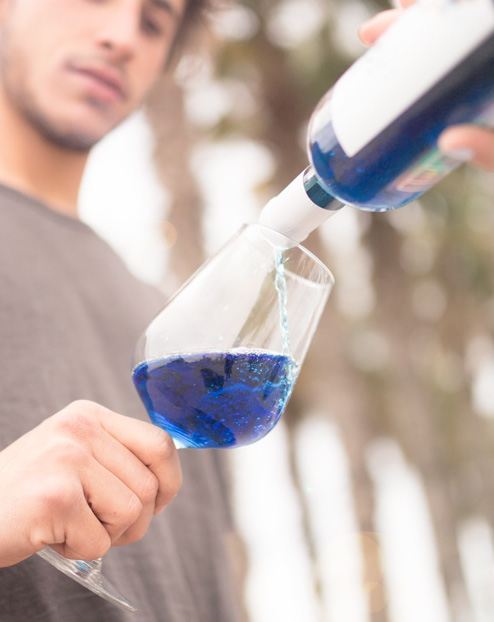 Blue wine made in Spain is hitting the media, but it seem the original idea from a Spanish startup got hijacked by a French entrepreneur, the Guardian reports.

Although ‘Vindigo’ is a chardonnay produced in Almería in Andalucia, it is sold by French entrepreneur René Le Bail and will primarily target France.  The order of around 35,000 bottles constitutes a market test if the French will adopt the novelty from Spain.

This is the second time that the bizarrely bright blue beverage has made headlines,  but the innovation is not necessarily well-received in a sector often seen as the exemplification of traditionalist.

Back in 2016, when Basque startup Gïk started to cork the world’s first blue wine, or in the words of their website, “to shake things up a little and see what happens”, they were met with vehement opposition from winemakers.

The blue color of these wines comes from a process of filtering it through grape pulp. It contains the natural pigment anthocyanin that produces the iconic indigo color. The original process was invented through a collaboration with chemists from the University of the Basque Country.

Purists saw the neon hue as an abomination; however, the process for making it is made from 100% blended grapes.

Read more:  The Germans may have Glühwein, but the Spanish have blue wine this holiday season

Nevertheless, wine producers filed a complaint over the unorthodox but highly ‘instagram-able’ drink that featured even in the Time magazine, and Spanish authorities responded.

The black-and-white administrative decision effectively prohibited the startup to venture out of the traditional color spectrum when marketing their product as ‘wine’. “The term ‘blue wine’ is not among the 17 categories of wine products” that the EU stipulates, the authorities were quoted by ElPais.

Updating the label as “other alcoholic drinks”, the startup claims to have managed to sell more than 400,000 bottles through their online shop, the supermarket El Corte Inglés and the duty free of airports.

Gik has used the controversy to sharpen its image as young and brave rebels battling with dusty traditions. “You create the rules” says the headline of their website. However, many in the wine sector that place value on protective measures claim that these are not in place to exclude innovation but to safeguard quality of the product.

“Blue wine is now a thing because your Instagram doesn’t have taste buds. (Un) Fortunately, we do.”, mocked the Washington Post in 2017 Gik’s product.

Indeed, Gïk’s team of six founders did not have an education in wine production. In an interview with Spanish media, they told how the idea to create a blue wine came from reading a management and marketing book ‘Blue Ocean Strategy’.

While the metaphorical red ocean is deemed full of sharks, the blue ocean stands for innovation. “It seemed to us authentic poetry to go from the red liquid of the wine to the blue that we proposed.”, the founders are cited.

In the new attempt to enter the French, the marketing strategy is different by putting a greater focus on the taste of the product.  “Women appreciate it a lot. (…) There is cherry, passion fruit, blackberry. It’s a festive wine!”, Mr. Le Bail is cited in the media.

Blue or red, after the Spanish startup tested the waters, it will now be seen how the innovation will be received in France, another stronghold of the traditional winemakers of Europe; and if more entrepreneurs want to follow the attempt to break their well-protected rules.