Ticketbis has raised capital every single year -except one- since it was founded in 2009. We talk to CEO Ander Michelena about their approach and the reason behind it.

Now that it seems like there’s more capital in the Spanish startup market than ever before, some are starting to contemplate the different options they have available to raise money.

Some believe in only raising capital when you need it, and others think that entrepreneurs and startups should take advantage of market conditions and raise whenever they can. Save it for a rainy day, as it’s often said.

Ticketbis is an interesting case when it comes to their fundraising strategy. The ticket reseller founded by Ander Michelena and Jon Uriarte has transformed itself into one of the biggest Spanish startups in terms of employment (more than 300 people) and size (gross sales of €54 million in 2014, +86% YoY). And to achieve this, they’ve raised a significant amount of capital over a long period of time and through various rounds of financing, to the tone of almost one every single year. 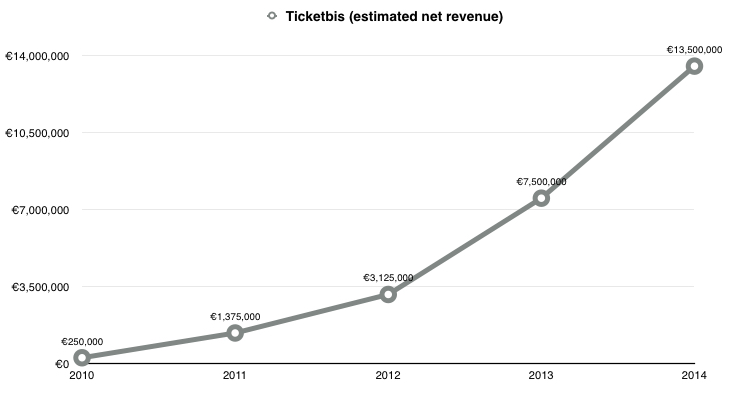 Ticketbis’ estimated net revenues, based on a 25% commission

I recently sat down with Ander to talk about the company, and he mentioned the fact that their fundraising strategy has served them pretty well, allowing them to expand internationally very quickly (Europe, Latam and Asia) while still keeping control of the company.

Here’s a breakdown of Ticketbis’ rounds since 2009, the year the company was founded in Bilbao:

When asked about why they decided to follow this strategy, Ander explained that given their growth, they’ve never had significant problems raising capital. “For many years we only worked with private investors and most of our rounds were oversubscribed”, he says. “The main reason for that is that these type of investors and deals tend to be less complicated, especially when you compare them with Venture Capital”.

Ander says that at the beginning they decided to raise capital from Euskadi-based funds who offered “very good conditions” and allowed them to buy shares back years down the line.

“We’ve never been a big fan of raising too much capital and too quickly”, Ander admits. “We think raising a bit of capital every year is a better strategy, and we’ve been able to do so while hitting higher valuations and diluting ourselves and our employees less and less”.

And now that the company is no longer small, they’ve reached out to Venture Capital to be more aggressive in terms of growth.

It’s true that this won’t be possible for startups who haven’t shown as much traction as Ticketbis, but it’s still interesting to see that different startups follow various approaches when it comes to fundraising. And Ticketbis is willing to talk about theirs.