Will Cataluña become an independent country in the near future? How could this affect the Spanish startup ecosystem? We talk with various members of the scene to hear their opinions.

When Spain wakes up on the 28th, the country might be posed to face one of the fiercest challenges it has seen in recent history. On Sunday, the previous day, millions of Catalans will vote on the future of their region, choosing the government that might be responsible of driving Catalonia out of Spain and thus becoming, in theory, an independent country.

If Junts pel Sí (Together for Yes), the Catalan independence coalition, scores a significant victory this weekend and achieves parliamentary majority, the future of one of the richest (it accounted for 18.8% of the country’s GDP in 2013, the most for any comunidad autónoma) Spanish regions might change for good.

If Junts pel Sí wins the elections, Catalonia’s current president, Artur Mas, has pledged to lead a transitional government that would draft a new Catalan constitution and negotiate with the Spanish central government their break away from Spain.

While the pro-independence movement has gained increasing traction in recent years, those in opposition of the secession of Catalonia have remained particularly quiet until recently.

Although there still remain many questions about what an independent Catalonia might look like -the current local government has yet to fully explain their fiscal and economic plans for the region-, in recent weeks a significant number of large companies and representatives of business sectors have come out to alert of the consequences of an hypothetical departure.

The CEOE (Spanish Confederation of Employers’ Organizations), a major institution that represents the Spanish business community, said on September 8 that the living conditions of Catalans would substantially decrease in the case of independence: lower salaries, employment, investment and exports were their main arguments. Banco de España (BdE), Spain’s central bank, has also put clouds over the region in the case of a Junts Pel Sí victory.

Spanish powerhouses such as BBVA, Telefonica and many others have just recently started to voice their opinions, backing the Spanish central government and warning Catalans of what an independent future might look like. “The economic impact would be very negative”, Telefónica’s president Cesar Alierta said this week.

Update: Both BBVA and the Spanish central bank have recently amended their statements, painting a more positive picture in the case of independence.

David Cameron or Angela Merkel, the prime ministers of the UK and Germany, respectively, have claimed that an independent Catalonia would have leave the EU and the euro, being forced to “join the line to become part of the European Union”.

It’s a public and social battle between those in favour of an independent Catalan state and those in opposition, while the majority of Spain’s society watches closely the movements of both sides.

The startup community talks about the independence of Catalonia

If Catalonia does become an independent country in the next few months, one has to wonder what might happen to its booming startup and technology sector, which many in Europe say it may soon rival cities like London, Berlin, Paris or Stockholm.

Catalonia-based startups raised €176 million in 2014, a 126% increase compared to the previous year and €116 million more than those in Madrid. The Northern region accounted for 60% of all investment euros received by Spanish companies. 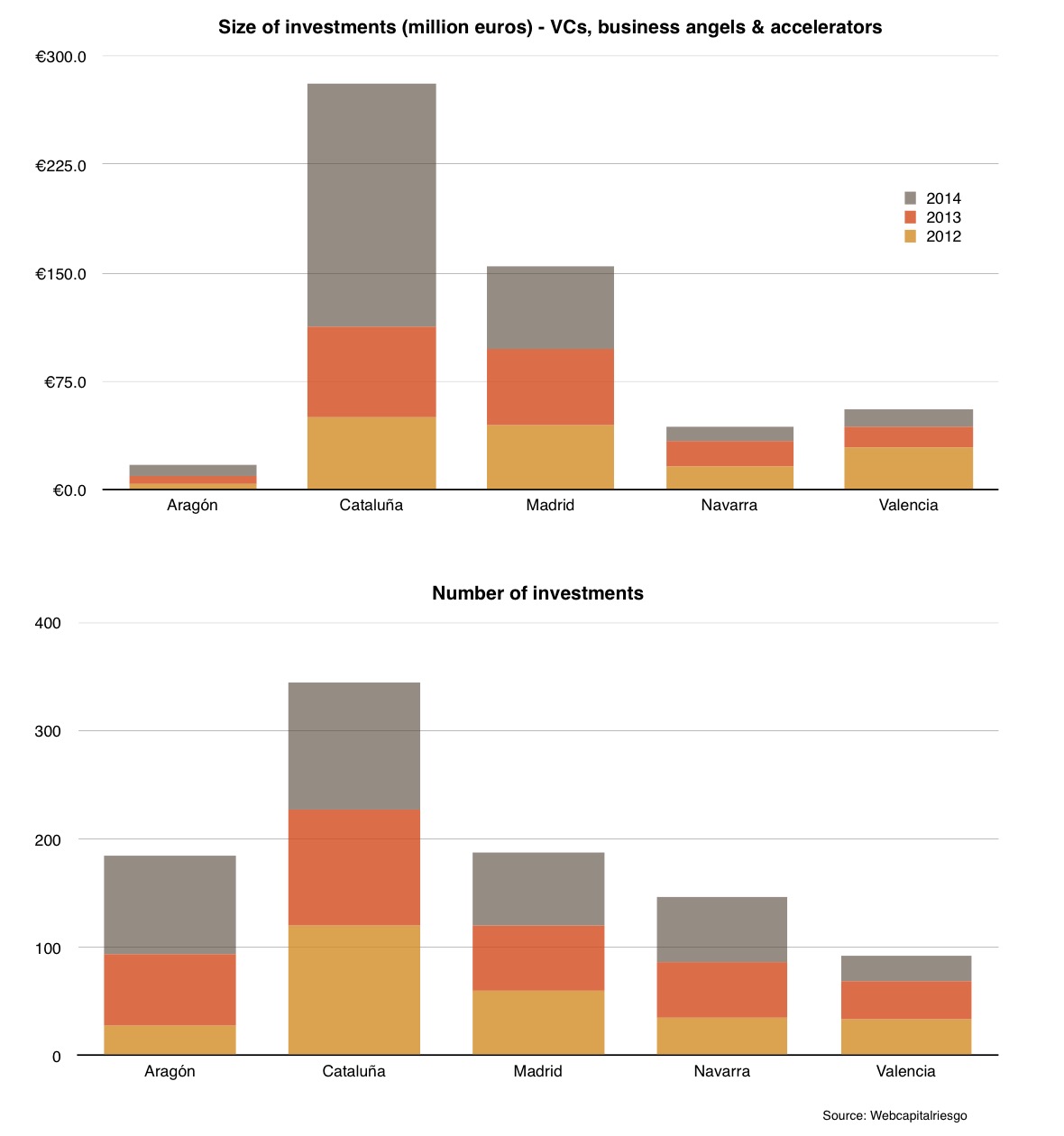 Also worth noting is the fact that Catalan companies received €112 million of public funding in 2014 (from ENISA, CDTI and other state-owned vehicles) and these could disappear if an independent state is formed.

“There’s a very positive dynamic happening in Barcelona and its independence would probably be a stopper of this for some time, even if it’s just temporary”, says Christopher Pommerering, a general partner at Barcelona-based VC firm Active Venture Partners. “I’ve been in this region for 17 years because I found my dream city here”, he says.

Pommerering, as those interviewed by Novobrief for this article, concede that the main and most immediate consequence of the break away of the region would be a significant dose of uncertainty, which is precisely what businesses and investors like the least.

Jesús Monleon (Offerum, SeedRocket), who’s in favour of the independence of Catalonia, says that “despite the fact that there’d be uncertainty, this would disappear in the mid term mostly because startups and tech companies look further than just Catalonia and Barcelona”. “People who surround me are acting like nothing is going on or as if nothing will happen”, he adds.

“Those who are really afraid of this are business owners who have a significant dependance on Spain”, says Jordi Priu, managing partner of 101Startups and CEO of Manufactura Moderna de Metales S.A. “The ones who don’t sell much to Spain or who have a very diversified business, in many cases, see the secession of Catalonia as positive”, he explains.

“Whatever happens, people should get together to make sure that what’s created is even more positive” – Christopher Pommerering

Priu once again mentions the potential negative aspects of the uncertainty that this could cause. However, he argues that “once a fiscal and economic plan is presented, Catalonia and Barcelona might become and even more strategic region for investors and entrepreneurs”.

Marek Fodor, founder of Atrapalo and currently the chairman of Kantox, also adds a “possible brain drain -people want to launch businesses in a market that’s bigger than just 7 million people- and a temporary stop of investments” as possible consequences. “I don’t believe the tech sector would be harmed much by this, though”, he adds.

“It’s not all about yes or no”, explains Pommerering. “It’s about being well prepared for whatever outcome happens. Whether something happens or not, people should get together to make sure that what’s created is even more positive than what we have now. Change is always positive if it’s managed in the right way”.

Easier said than done given the country’s past history.

Novobrief reached out to more than 15 people for this article. The vast majority declined to comment and said that it’s a very delicate and sensitive issue that they are not willing to discuss in public.