David Bonilla, CEO and co-founder of Otogami, explains the business model of their startup and how they make money.

This post was originally published by David Bonilla on Otogami’s blog (in Spanish). David is the CEO of Otogami -a Google for videogames- and Runnics -the best running shoes comparison engine-. We’ve decided to translate his post due to its clear explanation of Otogami’s business model and in the hope that it helps other startups and entrepreneurs understand this and other similar business models.

At Otogami we aim to bring more transparency to a traditional and quite opaque sector, the Spanish videogame industry. Transparency that should start with ourselves, and that’s why we’ve decided to share our revenue and financial figures.

Videogames move ton of money… you must be rich by now!

In reality… no. According to AEVI, the videogame market in Spain saw sales of €762 million in 2013, including consoles and peripherals. 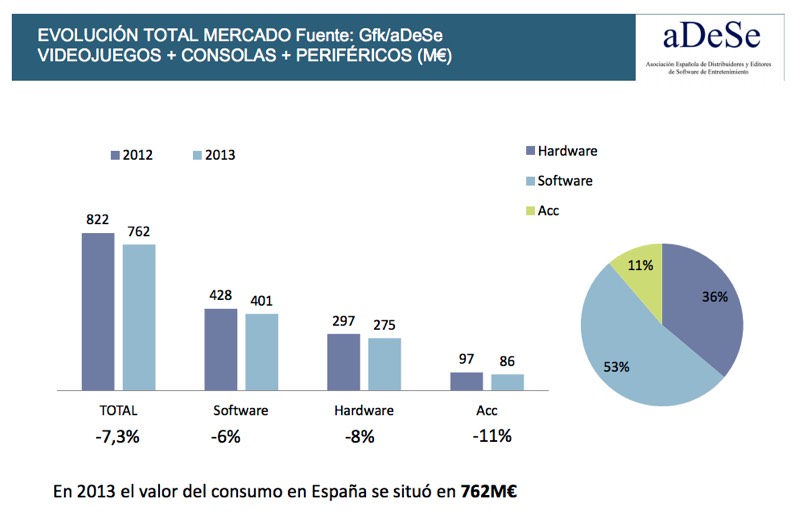 Only 53% of those 726 (about 400) could be attributed to software sales -aka games-, which is what most people buy through Otogami.

It’s true that these numbers from AEVI don’t include digital downloads or imports, but it’s also true that the vast majority of sales continue to take place at retail stores.

Don’t let others fool you: in 2012 insurance companies moved €57 billion in Spain, 57,000 times more than the videogame industry. Maybe this will help you understand why there are many more insurance price comparison sites than Otogamis….

At the moment, Otogami only has one business model: affiliate marketing. We send traffic to online stores and, if those visits end up buying something, some merchants will share part of their revenue with us. Some, because many don’t give us anything in exchange. 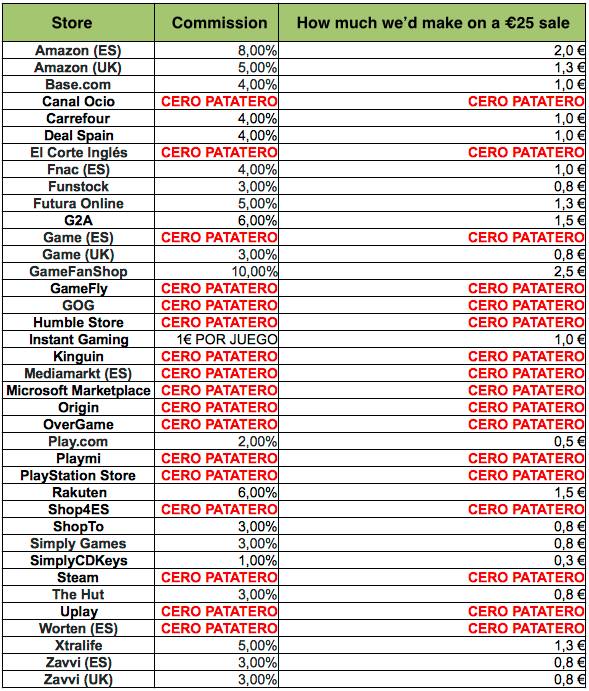 As you can see, the videogame business is one that heavily depends on volume sales. It’s not a margin game, and that -instead of imports- is what is causing many small stores to suffer. The situation becomes even worse when the stores we send most traffic to -such as Game or other digital platforms- don’t want to collaborate with us.

That’s why you won’t see many of the stores above in other price comparison sites. Some competitors only want to include those that pay a commission, and it makes total sense to do that. However, at Otogami we want to build strong relationships with our users instead of focusing on transactions.

It doesn’t matter if we don’t get paid when we drive a certain number of sales. If we always provide the best price and if we offer a good service, users will come back to Otogami and word of mouth will drive our growth. It’s a risky, and different, bet.

Want to know how we’ve been doing so far?

Following our very own desert path, Otogami hasn’t stopped growing at double digit rates since August 2014, when we launched our 2.0 version. However, this is not enough. Otogami’s biggest problem is that the general public doesn’t know about it. 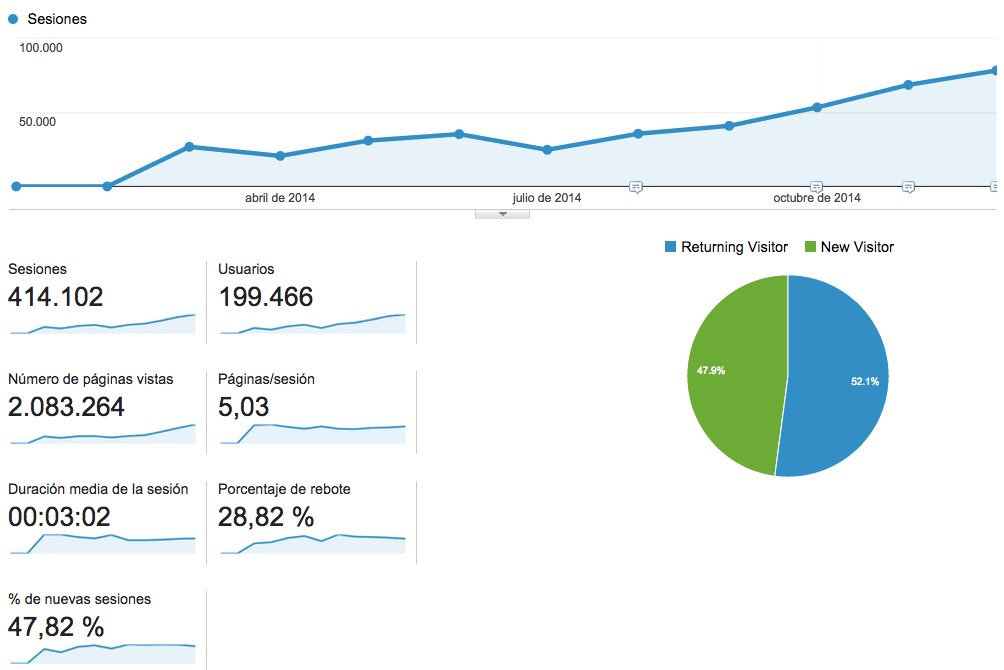 After suffering in August, we’ve been growing at above +10% every month but we’re far from being profitable. We closed 2014 with the highest month in our history in terms of sales, at €31,209, that paid us €2,004 in commissions. 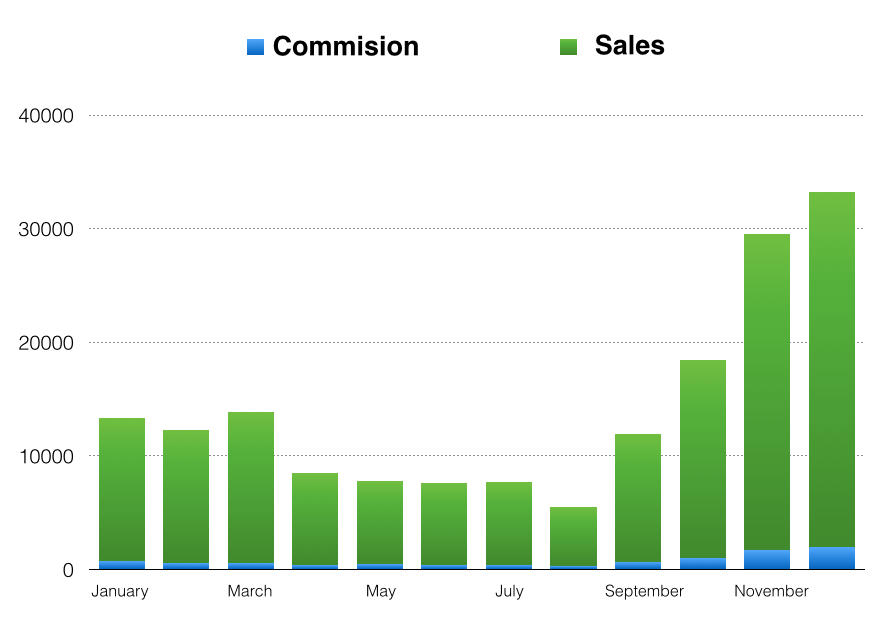 Otogami has 5 full time employees and the company has monthly expenses of around €18,000, counting salaries, office space, services and infrastructure. We’re also developing a different product -Runnics, an Otogami for running shoes- and it would be unfair to assign all of that budget to Otogami, but even if we make a simple split of 50%, we’d need to grow at 10% in the next 16 months to break even.

The company survives thanks to an initial investment of €330,000 and some public money we’ve just received, but it’s quite clear that we need to grow even faster to bring those 16 months down and guarantee the company’s survival.

Ok. You need to grow but… how are you going to do it?

We’ve tried to build our startup from Spain and for our country, but Otogami’s future is in the US. Not only because it’s a much bigger market than ours, but also because the ecosystem seems much more open and welcoming for our tool.

Similar apps like isThereAnyDeal or Razer Cortex have received much more coverage on media. We, as an example, were the first website in the world to track HumbleStore (it took us less than 4 hours since its launch) and we were not able to have someone cover it. We tried to close deals with media and publishing platforms to integrate our search engine with their content but, to be honest, we’ve had more success outside of Spain.

Our last bullet before packing our bags and moving to the US has been PowerUp!, a browser extension that allows anyone to use Otogami’s search capabilities without even visiting our website.

The good thing about the extension is that it allows us to generate recurrence: instead of starting every month with 0 visits, now we start off with thousands of potential users that have our extension and with whom we will try to obtain the highest number of commissions possible, whether they visit Otogami or not. If you want to contribute to Otogami’s future, install it. It won’t cost you anything and you’ll save money with your purchases.

These are PowerUp!’s stats in the Chrome Store in the last 30 days. Peaks in installations relate to some campaigns we’ve done with YouTubers that have, in fact, worked pretty well.

The worst part about the world of extensions is that… it’s a jungle. Over the past few months we’ve noticed some things that would cause many to throw up: software that places proxies outside of browsers to affiliate all the traffic, websites that open 1px iframes that load Amazon’s site to leave an affiliate cookie and… then there’s this: antivirus AVAST labelling as virus every single price comparison engine that… competes with theirs.

Things that make our efforts to catch as much commissions as we can seem naive compared to what these companies are doing to win a small commission.

In the next few months you can expect the following functionalities from Otogami:

Stories like this in which we explain what we do and why we do it. Here’s to the future.