Akamon has just been acquired by Imperus Technologies for €23.7 million. However, many are wondering if the gaming company was sold too soon.

The first rumours about an acquisition deal for Akamon appeared over the summer. Sources close to the company told Novobrief at the time that the startup would be sold soon, as its main shareholders (co-founding team and investors) wanted to cash out and knew that a significant financial return could be obtained.

Novobrief first talked to Carlos Blanco about the acquisition in early September, days before Canada’s Imperus Technologies published a press release announcing a pre-agreement with the Barcelona-based gaming company.

Blanco, who remained a board member of the company but was not anymore involved in its day-to-day operations, was in favour of selling. And so were the rest of shareholders and investors. This makes sense given the fact that he and co-founder Jaume Ferre owned 41% of Akamon through Pm5 Digital Entertainment Limited, a London-based firm they co-founded in 2011. Stock option plans aside, they could have earned between €8 and €10 million in the deal.

Akamon’s other co-founders controlled an additional 30% of the company. Investors Bonsai Venture Capital, Axon Partners Group, Grupo Itnet and Exelweiss had a stake of about 21% in the gaming startup and CEO Vicenç Martí between 7 and 8 per cent.

According to the Spanish official registry, this is what Akamon’s cap table looked like at the end of 2014’s fiscal year. 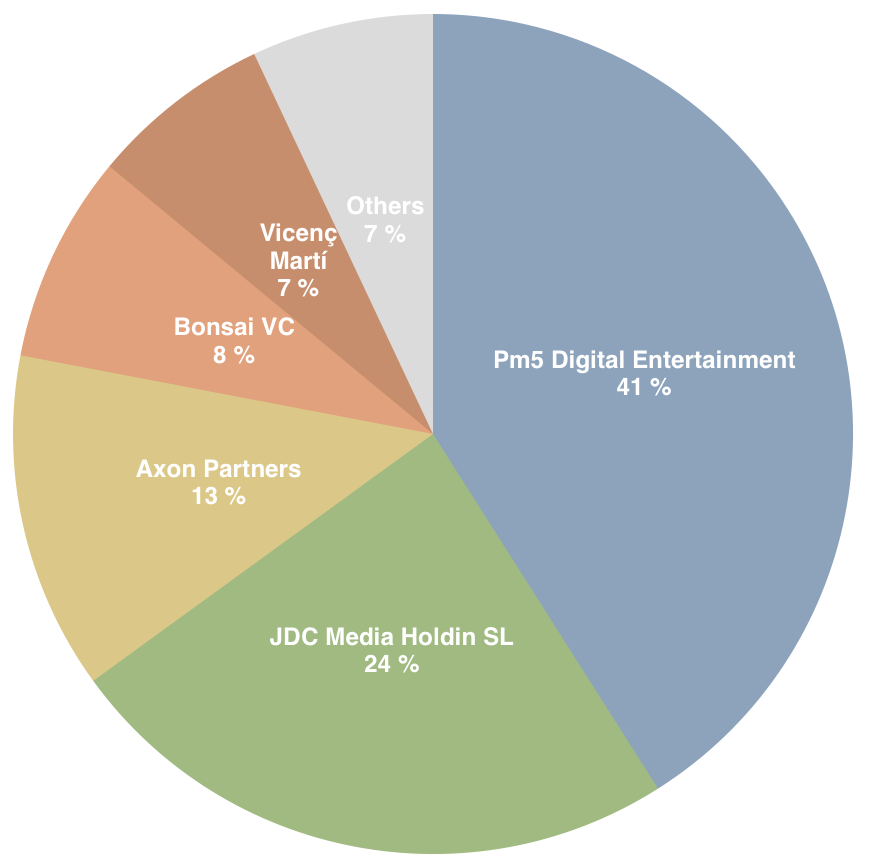 Despite the fact that a pre-agreement to buy Akamon was announced by Imperus in early September, the Canadian company went through a bit of trouble as it looked to complete the €23.7 million deal. This included changing CEOs and also looking for cash to buy Akamon, which it recently did, receiving $28 million from Third Eye Capital (TEC). Imperus’ stock has dropped 64% since early 2015.

Imperus had already made two down payments to Akamon of over $1 million, which means that the company was, in a way, forced to complete the deal if it didn’t want to lose additional capital and piss off its shareholders.

Akamon: strong on desktop, weak on mobile and social gaming

As with most startup exits, some are starting to wonder if Akamon was sold too soon. Its investors and shareholders probably don’t think so, since the financial returns they’ve received are significant and there’s very little Imperus stock involved in the deal.

Founded in 2011, Akamon was not in a tight financial position, as the company had revenues of $9 million in the first half of 2015 and profits of almost €800,000 in fiscal year 2014. Akamon’s cash reserves of €3 million will also be pocketed by its investors, early employees and founding team.

Akamon had built its mini gaming empire with a desktop first mentality, and the company had very little traction in the mobile and social space and only a handful of apps for iOS and Android. This, in a moment when casual gaming and gambling is quickly moving towards smartphones, represented an impediment to its future growth.

A source close to the company described Akamon’s exit as “perhaps a bit rushed”, but said that the company had enough cash to continue operating on its own and growing, albeit at a possible slower growth than in previous years.

Another source backed this view of the company’s health, pointing out that cash was not a problem but that the company was losing in the talent wars to other mobile gaming powerhouses that are headquartered in Barcelona, such as Socialpoint, Ubisoft or King. “There wasn’t a willingness to continue and fight for the future of the company, and talent was also an issue”, the anonymous source said.

Both sources claim that if the company had made a good and careful transition to mobile and social gaming, its acquisition price could be much higher down the road. Akamon decided not to pursue this and it €23.7 million on the table to back their decision.

It wasn’t time to take more risks, and the decision to sell the company was unanimous.