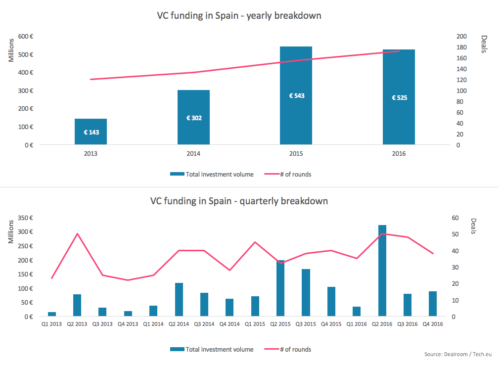 I just published this on K Fund’s blog. It’s an analysis of Spanish tech investment activity in 2016, using data from Dealroom, Tech.eu and also some that I’ve been collecting since 2013.

The main conclusion I can draw from this is that not much has changed in 2016 compared to the previous year, when investment levels hit an all-time high in Spain, reaching €543 million. The number of deals continues to grow, which is good news, and late stage rounds are still very few (Cabify was the only round bigger than €100 million in 2016).

What I think is really interesting is the fact that we’re seeing more and more Series A rounds (those between €1 million and €10 million) in Spain, which also coincides with an increasing number of VC firms raising capital to fund those companies.

As I wrote on K Fund’s blog, I think the data sample we have is still too small to draw big conclusions. A big round can heavily impact the analysis and lead to wrong conclusions, and that’s what I’m trying to avoid for the moment.