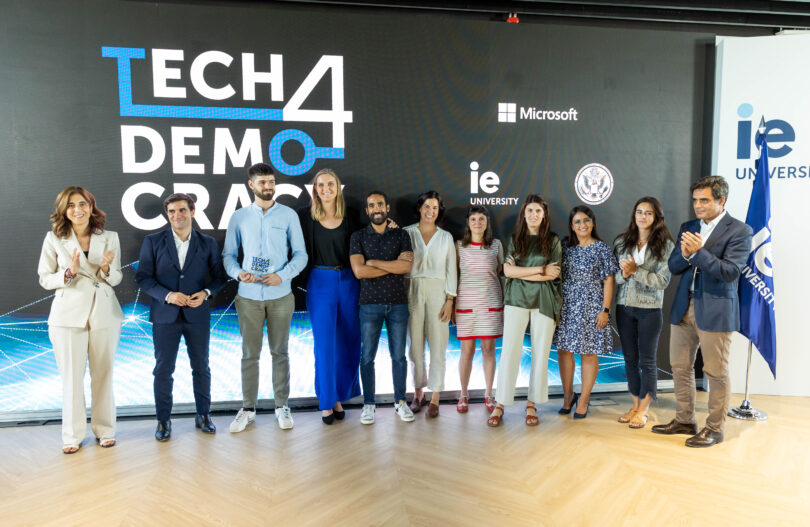 The NATO summit has paralyzed Madrid, but at the same time has been a perfect opportunity to talk about society and democracy. In this area, startups have been active for a while seeking to make relevant changes in the social fabric of cities and regions. That is why at the end of last year IE University launched Tech4democracy Global Entrepreneurship Challenge in partnership with the U.S. State Department. The main goal of this initiative is to identify entrepreneurs and startups that are building and advancing democracy-affirming technologies.

The first Tech4democracy final was held in Madrid two days ago during the NATO summit. The competition brought together European startups at IE University’s IE TOWER showing some of the most exciting tech right now that involves a better understanding of societies and democracies.

The winner of this edition was Citibeats, a Spanish scaleup that develops the first Artificial Intelligence specialized in active listening to citizens, and the only one created specifically to work within the framework of the UN Sustainable Development Goals (SDGs). Its platform allows to enhance civic engagement, improve citizen participation and maximize social impact in cities.

Diego del Alcázar Benjumea, CEO of IE University, highlighted during the event “the decisive role of universities in international affairs as meeting places for different agents and for the exchange of ideas in a context of complete freedom and respect for disagreement”. For his part, Manuel Muñiz, provost of the same university, emphasized “The way we manage emerging technologies will determine our future. If we want stronger democracies we must understand and shape technological evolution. Therein lies the importance of a project like Tech4Democracy”.

The other five finalists of the European edition of Tech4Democracy Venture Day were the German startups Civocracy, the Italian startup Politically, and the Spanish startups Kourum, Sigo Gestión, and Maldita.es.

The Latam edition is coming

The Tech4Democracy Challenge Latin American edition will take place in Bogotá next October. Initiatives can already be submitted through this link. The Latin American finalists from the region will be able to present their project before a jury of specialists at Venture Day in Colombia. In September, the North American final will take place in New York City during the UN General Assembly.

Venture Day competitors will gain accelerated access to a four-year Microsoft for Startups Founders Hub membership, which includes $150,000 of access to cloud computing, free productivity software, a mentoring community, and technical guidance. The project is part of the Summit for Democracy, a virtual summit that brings together international leaders to discuss the challenges facing democratic systems, fight authoritarianism and corruption, and advance the protection of human rights.