Madrid-based CartoDB has closed a $23 million investment from Accel Partners and Salesforce Ventures. As a result, the company will move its headquarters to NYC. 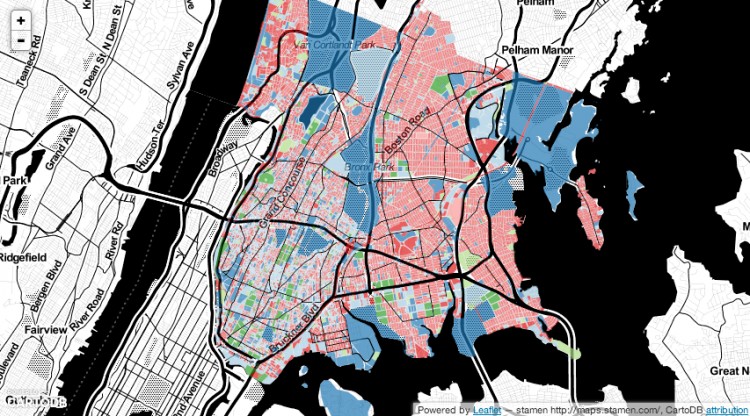 Mapping and geospatial visualisation company CartoDB has closed a $23 million Series B investment. Accel Partners leads the round, with previous investors Earlybird VC and Kibo Ventures also participating in the deal. Salesforce’s venture arm, Salesforce Ventures, is also joining CartoDB for the ride, with a minority stake in the now NYC-based company.

On Accel’s part, the investment was led by Harry Nelis, who joined the London firm in 2004 after spending a significant portion of his career at hedge fund Perry Capital and in M&A at Goldman Sachs. Nelis led Accel’s investment in KAYAK, which ended up going public in July 2012 and acquired by Priceline in 2013 for more than $3 billion.

Salesforce’s experience in selling SaaS products and software to large organisations will also come in handy, the company says.

CartoDB raised its $8 million Series A round exactly a year ago, in September 2014. Since then, the company has experienced significant growth on various fronts. Not only in media exposure with its now famous maps populating articles on big publications like The Guardian or on Twitter, but also on the business side of things.

The company’s revenue (measured as MRR) has grown 250% over the past year and that the company has won new large clients such as Amtrak, Deloitte, Royal Bank of Scotland or the cities of New York and Mexico DF. The number of customers has increased by 300% YoY.

“The real challenge over the next few years is to maintain this kind of growth”, CartoDB’s co-founder Sergio Leiva said in a statement.

Asked about the decision to raise another big round in such a short period of time, he admits that their current growth combined with favorable market conditions made it a no brainer. “Closing this type of rounds usually takes between 3 to 6 months, but given the current state of the market and our trajectory, we were able to accelerate the whole process and close it faster than we imagined”.

CartoDB will move its headquarters to New York

CartoDB is an open source product that stems from Madrid-based consulting company Vizzuality, which was co-founded by Sergio and Javier de la Torre in 2009. Up until its Series A, CartoDB was bootstrapped and reached more than €1 million in annual sales.

These days CartoDB is formed my two main products: the platform and the editor. The former is the one that is often integrated in the technical and development stack of companies, allowing these to make better decisions based on geospatial data and apply what the Spanish startup refers to as “local intelligence”. CartoDB’s editor, on the other hand, allows all kinds of users to visualise data on maps.

A key role in the integration of CartoDB’s platform in large clients are so-called partners, an area that is is working really well for the 60-person company. Partners help CartoDB integrate their software in big organisations, becoming a significant sales channel that helps the company amplify their audience and reach. “It’s very important for us to grow as an ecosystem, represented by our community of users, clients and partners”, CartoDB said in a statement.

CartoDB’s Series B also means that the company will move its headquarters to New York City, where they’ve had an office for a couple of years and where most of their big business relationships are being established.

Although the product team will remain in Madrid and the company plans to increase its size, Sergio admits that the idea is to grow its NYC-based team at a faster pace, especially in terms of data scientists, local intelligence staff and sales.

This, however, doesn’t mean that Spain won’t remain important in CartoDB’s future. “We’ve grown tremendously in Spain over the past few years and there’s still a big opportunity to become a leading startup in the country, attracting tech talent and helping startups become more important at a local level”, he explains.

As many have said in the past, there’s a lack of senior talent in Spain at various levels (technical, sales, marketing, etc) and stories and experiences like CartoDB’s and others will hopefully help in filling that gap.

As for the future of the company, Sergio says that the key is in convincing enterprises that the analysis of geospatial data is a must. “The companies that understand the value of this kind of data and how to take advantage of it will be much more efficient going forward. Knowing not only why things happen but where they happen is of enormous value to both CartoDB and the companies themselves”.