The Madrid-based transportation startup expects to reach $40 million in sales in 2015. Latam accounts for 80% of the company’s business.

On-demand car service Cabify has picked up $12 million in funding. The company’s Series B is being led by ecommerce giant Rakuten and includes the participation of Seaya Ventures, which led its Series A a year ago along with Winklevoss Capital and Black Vine, the investment vehicle associated to AngelList.

This deal brings the total raised by the Madrid-based startup since its founding in 2011 to $26.5 million. According to the Financial Times, Cabify’s current valuation sits at €100 million.

Cabify offers a high-end and on-demand car service to consumers and businesses in 14 cities throughout Spain, Chile, Peru, Colombia and Mexico. The company expects to use the cash to increase its footprint in Latam, which currently accounts for 80% of its revenue.

If all goes according to plan, revenue in 2015 could reach $8 million for the 150-person. Cabify charges an average commission of 20% on each ride (same as Uber) and drivers keep the rest.

The company claims that it could be EBITDA positive in all of the countries where it operates, but they “keep investing in growth because we believe we can have a much greater market share”.

The company competes against Uber and other local players in Latam. Uber operates in 12 cities in the reagion, but the Travis Kalanick-led entity is currently focused on China, where it’s deploying more than $1 billion in capital to compete with Didi Kuaidi in one of the world’s largest transportation markets. 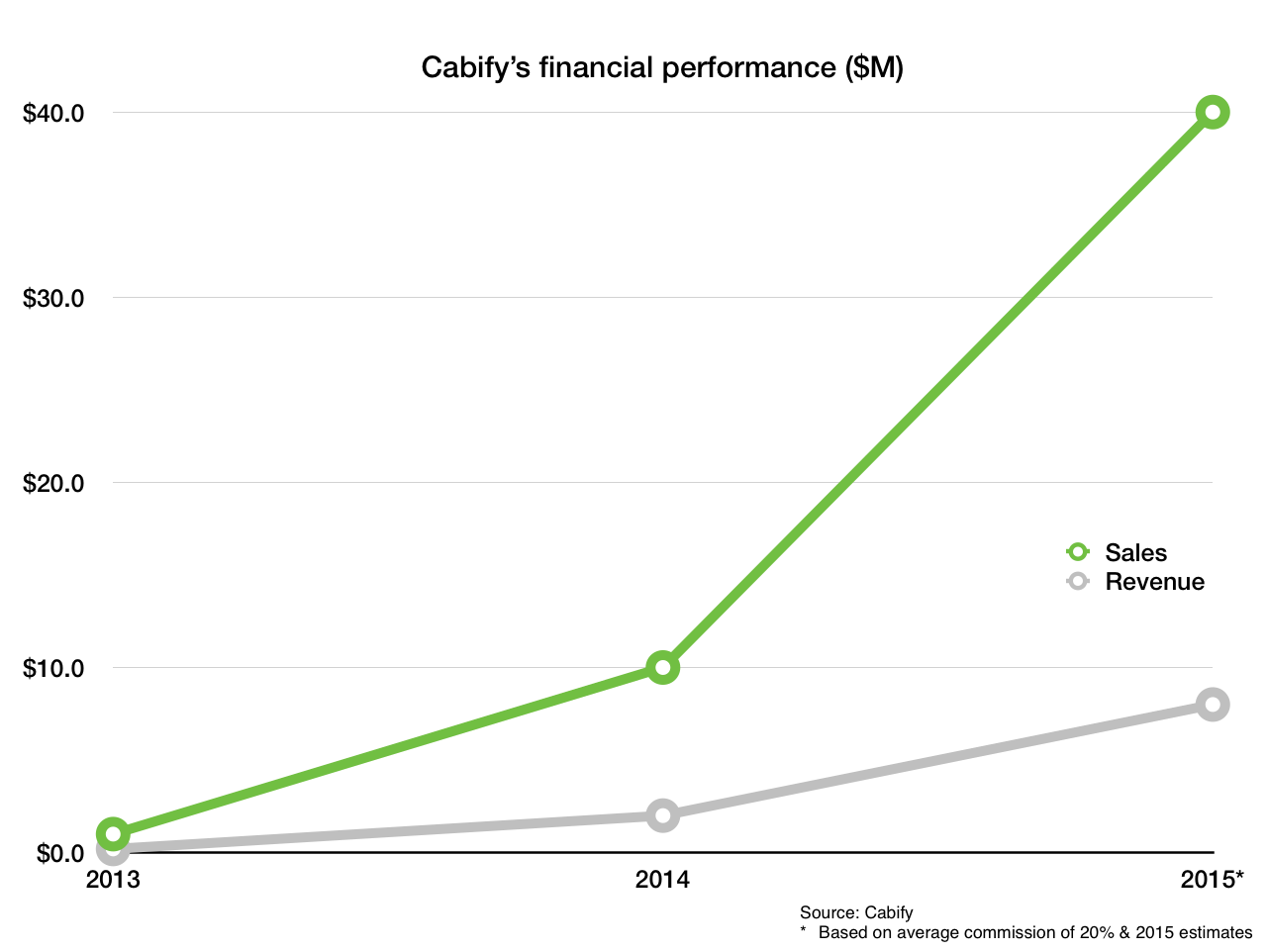 In the meantime, Cabify continues to solidify its position in Latam, where its enterprise business is performing better than expected, according to Juan de Antonio. Asked about the economic balance between its B2C and B2B services, de Antonio said that it changes on a country basis. “In Colombia, for example, we only offer Cabify to businesses. In some other markets where we combine both offerings, corporate already represents more than 60% of our income”, he adds.

Cabify continues to operate in Spain despite the fact that Uber was banned last year. The San Francisco-based company entered the Spanish market with UberPOP, a car sharing service which allowed anyone -professional driver or not- to move people around in Barcelona and Madrid using their own vehicles.

The service was deemed illegal by Spanish authorities from the very beginning -according to Spanish law you can’t drive people around in your car for a profit- and in December of 2014 it was forced to shut down. The same has happened to UberPOP in many cities across Europe, which are now waiting for the European Union and European Commission to finish an investigation that will establish a regulatory framework for Uber and other on-demand car services.

The case of Cabify is different, and the company has yet to suffer much backlash in Spain or in Latam. The company’s drivers in Spain own VTC (private driver service) licenses. In the case of Latam, the requirements depend on the country of operations.

“Each country is different, but we are fully legal in all of them”, Juan de Antonio explains. “In Mexico or Peru there are no car limits. In Colombia Special Service cars can grow as long as there’s demand from companies and businesses. In Chile taxi licenses can be replaced by VTC ones, and the same will be true in Colombia very soon”.

The situation is quite different in Spain, where VTC licenses are capped by law. For every 30 taxi licenses there’s 1 for VTC. “This is an artificial limit that slows growth and stops innovation in our industry”, de Antonio says. “We were lucky to bring investors on board that supported our international expansion strategy”.

Moving people… and goods around

This is not the first time Rakuten invests in a transportation startup, having backed Lyft in its $530 million Series E round.

Rakuten also happens to know a lot about an area of increasing interest for Cabify: ecommerce. The Spanish company is looking for ways to get into the delivery business and has already ran experiments with companies in Spain and Latam.

Juan de Antonio says Cabify could help traditional retail companies get into ecommerce and manage their last-mile delivery business. “Imagine a big retail chain like Mediamarkt: with Cabify they can deliver a TV to your door in 30 minutes. With Amazon you have to wait 24 hours”, he says.

The company argues that it can use its network of cars to also deliver goods, which seems to be an area of interest for many in the on-demand car sector. In the case of Spain, the size of the network will be limited by law. At least for now.